This article summarises the development and testing of a novel vaccine that could be personalised for the treatment of immunotherapy-resistant cancers, such as triple-negative breast cancer (TNBC). 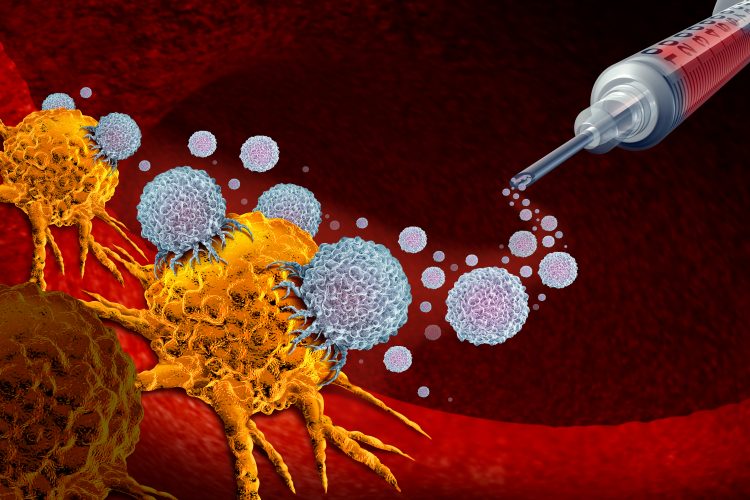 While immunotherapies may have been a breakthrough for the treatment of many cancers – providing both immediate tumour reduction and long-lasting protection against recurrence – some cancers are particularly resistant to immune checkpoint inhibition. Triple-negative breast cancer (TNBC) is one of these cancers, where the immunosuppressive tumour microenvironment stops immune cells from infiltrating the tumour and therefore prevents patients from responding successfully to immune checkpoint blockade. As a result, TNBC patients are treated with chemotherapy instead.

Chemotherapy was developed to kill rapidly dividing cells, such as those causing cancer; however, it has a range of severe side effects because some healthy cells, including those in the skin, bone marrow and lining the gastrointestinal tract, also divide rapidly and are thus affected by the treatment. Additionally, chemotherapy ceases to be effective once it has left the body, providing no protection against disease recurrence.

There is an urgent need to develop an effective treatment for immunotherapy-resistant cancers that can provide both the immediate effectiveness of chemotherapy and the long-lasting metastasis and relapse prevention of immunotherapy. In an effort to achieve this, researchers have designed a new biomaterial-based cancer vaccine that combats cancer with ‘immunogenic chemotherapy’1 – a chemotherapeutic agent that causes cancerous cells to die in a way that elicits innate and adaptive antitumour immune responses, which prime the body to react to cancerous cells should they recur.2

The vaccine discussed in the new study1 is based on technology first developed in 2009. With the original vaccines, the immune system was primed to respond to cancers using tumour-associated antigens (TAAs) – molecules found in cancer cells – which researchers selected and incorporated into a macroporous alginate hydrogel scaffold. According to the researchers, TAAs could either be isolated from harvested tumours or synthetically manufactured based on a genetic sequence. However, both these processes were long, tedious and expensive.

To bypass this issue in the new vaccine, they instead incorporated chemotherapy drugs that are capable of inducing cancer cell death and releasing TAAs directly from the tumour.

Having established this approach, they set out to apply their new vaccine to TNBC. The development process for formulating the final TNBC vaccine is discussed in their paper.1 The final TNBC formulation includes a protein molecule called Granulocyte-Macrophage Colony Stimulating Factor (GM-CSF); CpG oligonucleotides acting as an adjuvant; and the chemotherapy drug doxorubicin (Dox) attached to a peptide that is known to penetrate tumours, called iRGD. Each component is incorporated into an alginate hydrogel scaffold.1

Adapting the vaccine for TNBC

Establishing the effect of each component

The first step in the researchers’ vaccine design process was to establish whether Dox could induce the immunogenic death of 4T1 TNBC cells in vitro and in vivo. At this stage, Dox was attached to the iRGD peptide to achieve a more sustained release and aid in tumour penetration. They then assessed whether Dox could be released from pore-forming gels injected around the tumour (peritumourally) and induce apoptotic cell death. Balb/c mice bearing subcutaneous 4T1 tumours were peritumorally injected with gels containing both GM-CSF and Dox-iRGD, GM-CSF and unmodified Dox, GM-CSF and Dox-iRDG (a scrambled control) and GM-CSF alone. In these experiments, mice injected with GM-CSF and Dox-iRGD had more significant levels of tumour cell apoptosis. 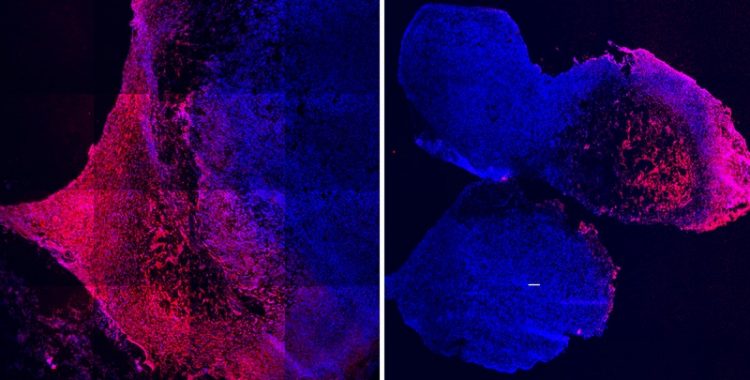 Bioluminescence imaging showing that when the chemotherapy doxorubicin (red) was bound to the tumour-infiltrating molecule iRGD, it effectively infiltrated triple-negative breast cancer tumours (blue) to attack them (left). Dox without this modification remained mostly within the hydrogel and did not migrate into the tumours (right) [Credit: Wyss Institute at Harvard University].

After finding that this combination could induce cancer cell death, the team began experiments with hydrogel scaffolds containing Dox-iRGD and GM-CSF. Gels with only Dox-iRGD did not show any therapeutic benefit, but by comparison those that also included GM-CSF significantly slowed the growth of 4T1 tumours. The investigators reported that while cancerous metastases were found in the lungs of all groups at 18 days post gel injection, there were significantly fewer in the GM-CSF and Dox-iRGD group compared to the GM-CSF and unmodified Dox, GM-CSF and Dox-iRDG or untreated mice groups. When the scaffolds were analysed, the team found that they had also accumulated a large number of dendritic cells, indicating that both the immunotherapy and chemotherapy components were active.

The researchers then established the ability of CpG oligonucleotides, a synthetic bacterial DNA sequence that is known to enhance immune responses, to potentiate antitumour efficacy. Mice injected with GM-CSF, Dox-iRGD and CpG had significantly slower tumour growth than untreated mice or groups vaccinated with either GM-CSF and Dox-iRGD or GM-CSF and CpG alone. The median survival of mice treated with the three components was significantly longer than that of the other groups.

The team evaluated the tumour microenvironment for post-treatment changes and found that tumours treated with hydrogel scaffolds containing GM-CSF, Dox-iRGD and CpG had enhanced cell-surface expression of calreticulin, an indicator of immunogenic cell death, compared to those treated with GM-CSF and Dox-iRGD.

Treatment with gels incorporating GM-CSF and Dox-iRGD with or without CpG increased the number of tumour-infiltrating dendritic cells by approximately 50 percent, despite the total number of dendritic cells remaining unchanged. The report also reveals that the tumours in all treatment groups had significantly increased T-cell infiltration and an increased ratio of effector to regulatory T cells.

The team also observed that in mice treated with the full combination there was a significant increase in the number of pro-inflammatory tumour-associated macrophages (TAMs) than in their untreated or GM-CSF and Dox-iRGD-treated counterparts. The researchers concluded from this that the hydrogel scaffold vaccine is able to repolarise TAMs towards a pro-inflammatory phenotype that has been associated with increased anticancer efficacy and extended survival in pre-clinical and clinical studies.

During their analysis the team observed that treatment with the full GM-CSF, Dox-iRGD and CpG-containing hydrogel vaccine upregulated the expression of programmed cell death ligand 1 (PD-L1) on tumour cells. They therefore investigated whether combining the vaccine with anti-PD-1 checkpoint inhibitors could improve antitumour efficacy. They found that the combination of anti-PD-1 and vaccine significantly slowed the growth of tumours and reduced their size compared to either the untreated population or anti-PD-1 therapy alone. The median survival was 27 days for untreated mice, 28 days for animals treated with anti-PD-1 alone, 37.5 days for those treated with just the vaccine and 40 days for mice receiving the combination (anti-PD-1 and vaccine). 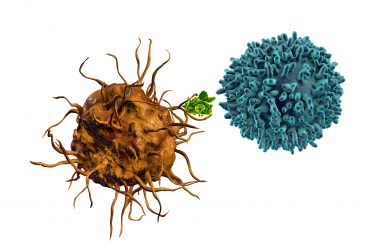 Dendritic cells (orange) present antigens (green) to T cells (blue) both to prime them for immediate action and to create memory T cells that circulate and provide longer term protection against the same target.

In the final experiments the team explored whether the vaccine prevented cancer recurrence. After surgically removing 4T1 tumours from mice, the researchers injected them with either the gel vaccine or a bolus vaccine (containing the same components but without the gel carrier). Using bioluminescence imaging the team observed that the untreated group quickly relapsed. In the bolus-treated group the cancer took longer to recur, but the gel vaccine resulted in the slowest tumour growth and improved survival.

They also explored the capacity of the vaccine to provide an immunological memory that would prevent cancer regrowth after primary resection. In so doing, they re-challenged the mice after surgical removal and vaccine administration with intravenously injected luciferase-expressing 4T1 cancer cells. Again, the team used bioluminescence imaging to show that all the control mice grew 4T1 metastases in their lung parenchyma, where mice treated with the gel vaccine showed 100 percent metastasis-free survival. The researchers concluded that this demonstrates “the potency and persistence of antitumor immune responses generated by the gel vaccine”.

“The ability of this vaccine to elicit potent immune responses without requiring the identification of patient-specific antigens is a major advantage, as is the ability of local chemotherapy delivery to bypass the severe side effects of systemic chemotherapy, the only treatment currently available for the disease,” said corresponding author of the study Dr David Mooney, who leads the Immuno-Materials platform at Harvard University’s Wyss Institute and is the Robert P. Pinkas Family Professor of Bioengineering at the John A. Paulson School for Engineering and Applied Sciences (SEAS), both US. “Not only does this vaccine activate dendritic cells with tumour-specific TAAs in situ, it also reshapes the tumour microenvironment to allow the immune system greater access to the tumour and creates an immune memory that prevents further recurrences.”

The team concluded that they are continuing to explore the potential of immunogenic chemotherapy with cancer vaccines and hope to further improve the vaccine’s antitumour efficacy for other difficult-to-treat tumour models.