New protein-painting technology could lead to developing cancer immunotherapy medicines that can be administered as a pill. 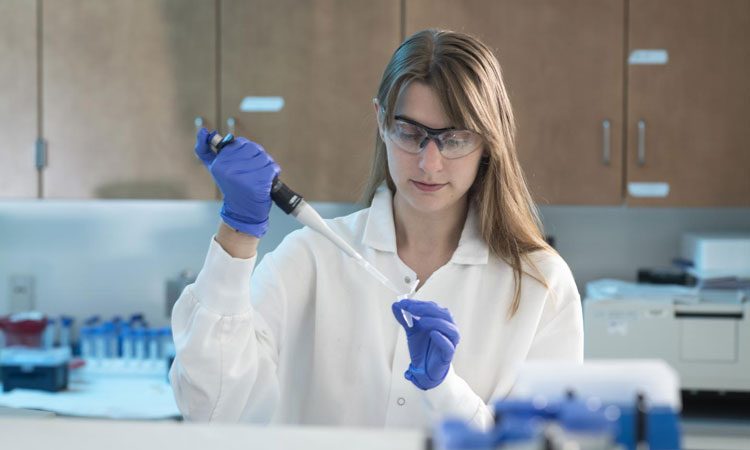 Amanda Haymond, a research assistant professor in the Center for Applied Proteomics and Molecular Medicine, used novel protein painting technology to identify the touching points of two proteins, which could lead to the development of new cancer immunotherapies (credit: Evan Cantwell).

The exact location where two proteins which are responsible for hiding cancer cells from the immune system bind has been discovered, providing a novel approach to developing new cancer immunotherapy medicines that can be administered as a pill.

The discovery from George Mason University, US was made possible by an internally developed protein-painting technology, said Amanda Haymond, lead author on the study and researcher in the Center for Applied Proteomics and Molecular Medicine and Institute for Biohealth Innovation.

The protein painting process starts with two or more proteins that when bound together, drive disease. The scientists use small molecule dyes to paint the bound proteins and then a chemical reaction known as denaturation chops them up. The final step is when scientists use a mass spectrometer to identify the unpainted regions, which is where the proteins touch. 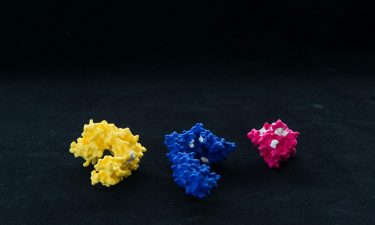 These 3D models of a receptor, co-receptor and ligand demonstrate how the protein painting technology works. Bound proteins in their native form are coated with small molecule dyes. The regions which are not painted when the proteins are bound, designated white, can be detected by mass spectrometry and inform rational drug development (credit: Evan Cantwell).

The protein painting technology specifically identifies protein-protein touchpoints, highlighting an ideal location and recipe to follow for drug development. The recipe, along with the fact that the technology allows for rapid performance testing of the drug, means that results can be produced in several days, rather than years.

The team then developed and optimised a novel protein dye that has been successfully tested on clinically relevant protein complexes, PD-1 and PD-L1.

“The secret to using the protein-painting technique is having the perfect dye molecule with just the right structure to bind tightly onto proteins,” Haymond said of the technique.

The findings were published in the Journal of Biological Chemistry.