A study has demonstrated a novel vaccine design in mice which could be used to immunise patients against HIV. 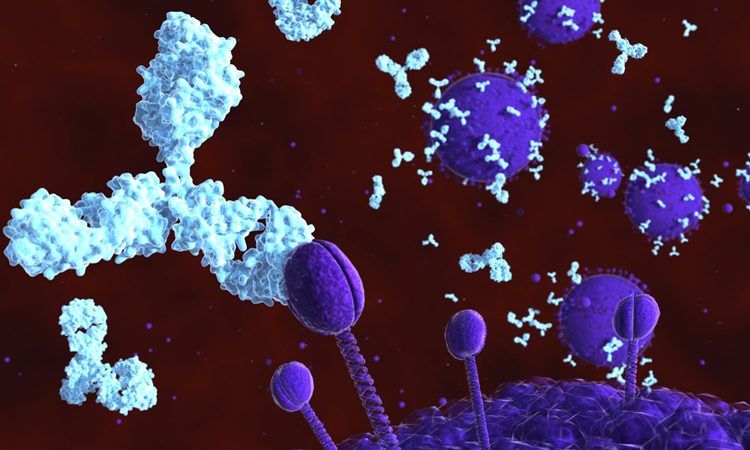 A team of researchers have conducted a successful proof-of-principle demonstration of an advanced HIV vaccine strategy, which they say may help protect human patients from the virus and other deadly infectious diseases. The group was led by scientists at Scripps Research, US.

The method is centred around stimulating the immune system to produce broadly neutralising antibodies (bnAbs) against HIV. These are capable of neutralising numerous strains of the virus by binding to important but difficult-to-access regions of the virus surface that have little variance from strain to strain. This process is based on a concept known as ‘germline targeting’. 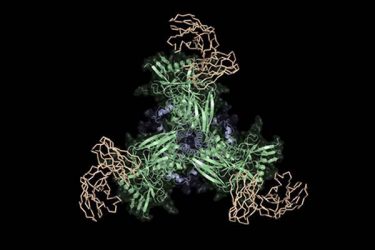 Scientists at Scripps Research were part of a team that designed and tested a new vaccine candidate (green and blue) that binds to precursors of HIV broadly neutralizing antibodies (tan) and has promise as the first stage of an HIV vaccine (credit: The Schief Laboratory at Scripps Research).

This approach aims to launch the production of a desired bnAb from B cells, which start off in a ‘germline’ state. After a viral infection, or after immunisation with a vaccine that mimics an infecting virus, some germline B cells will bind to structures on the surface of the virus. This stimulates the cells to begin a week-long maturation process, where the antibodies continuously improve their surface binding ability, which neutralises the virus.

The germline-targeting strategy for an HIV vaccine aims to stimulate the small number of germline B cells that are capable of maturing into cells that make bnAbs.

However, no HIV vaccine candidate has been shown to induce a protective bnAb response in humans so far. The researchers suspected that previous attempts to create an HIV vaccine that elicits bnAbs failed because they did not stimulate a sufficient number of these bnAb precursor germline B cells.

According to the researchers, they have developed a new, more powerful approach.

To demonstrate their technique, the researchers chose a known HIV bnAb called BG18 as the test case. They searched a large database of human antibody genes in order to find B cells making antibodies that naturally share BG18’s key features. Then they used a sophisticated strategy to select and evolve a set of virus-mimicking proteins that could potentially activate multiple BG18-like B cells. These proteins would eventually serve as ‘immunogens’ to stimulate BG18-like B cells in human vaccination.

As B cells differ from patient to patient, the researchers believe that a range need to be targeted so that vaccines have a more reasonable chance of activating them in any given recipient.

The team tested blood samples from HIV-negative human donors which confirmed that the immunogens bound well to normal circulating B cells that have the desired BG18-like features. Cryo-electron microscopy revealed that the antibodies produced by these B cells mimicked the structure of BG18 at the atomic level.

“Some of these B cells were exactly the type we were looking for,” says study co-first author Dr Colin Havenar-Daughton.

The team then conducted experiments in mice engineered to carry BG18-precursor B cells which demonstrated the immunogens could activate these B cells to induce potent antibody responses.

“We generated a mouse model with rare BG18 precursors and high levels of competing B cells, mimicking physiological conditions encountered during human immunisation,” said co-first author Dr Ying-Cing Lin. “We found that the designed immunogens stimulated a strong and specific response from the BG18 precursors and the elicited antibodies showed signs that they were maturing in the right direction.”

The team suggest that their findings could be used to inform an initial priming stage in a multi-stage vaccine aimed at eliciting BG18 and closely related bnAbs. The team now plans to develop immunogens for subsequent vaccine stages that will guide the antibody response to bnAbs. They envision an eventual HIV vaccine that combines several of these efforts to elicit multiple types of bnAbs against HIV.