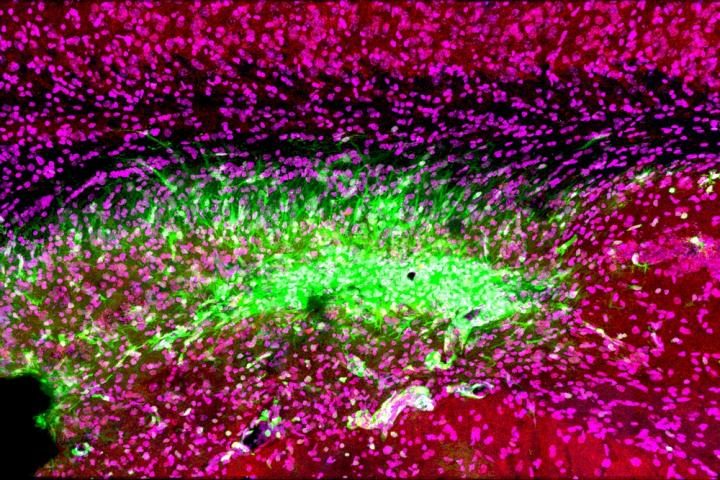 Even after a blocked vessel has been opened, immune cells in the brain (green) continue to attack synapses (red) and neurons (magenta) in the memory center of the brain, the hippocampus, for at least 30 days after stroke [credit: Medical University of South Carolina. Image courtesy of Dr Stephen Tomlinson.].

Researchers have developed a novel complement protein blocker which, when administered alongside reperfusion therapy, improved cognitive and motor recovery in a murine model of ischemic strokes.

Also, while blood flow is restored in 90 percent of patients, only 40 percent recover their motor and cognitive skills enough to cope with independent living within three months. Researchers at the Medical University of South Carolina (MUSC), US, believe this is because while blood flow is restored, an ongoing inflammatory and phagocytic response to the damaged tissue results in further degeneration and damage.

In an ischemic stroke the lack of oxygen due to a blood clot results in cells becoming stressed and rapidly dying. Even after blood flow is restored, cells which were stressed but did not die give off signal to the immune system, promoting inflammation and repair at the damaged area. The researchers on the latest study have previously shown that the complement system drives this inflammation and its proteins tag both dead tissue and stressed brain cells for removal.

This tagging of stressed neurons results in viable cells being destroyed, further exacerbating the damage to neuronal circuits and so researchers at MUSC sought to salvage them. The team developed a novel complement protein blocker, called B4Crry, which is designed to act only at the site of a stroke injury and blinds the complement proteins to the signals of stressed brain cells, preventing them being tagged.

The team also demonstrated that after clot removal adding B4Crry to reperfusion therapy reduced the potential for haemorrhage, a complication associated with late administration of reperfusion therapy, even with treatment given up to six hours after the stroke. The team concluded that not only could complement inhibition make reperfusion therapy more effective and safer, but also extend the treatment window.

The team are excited about the possibly using the complement protein blocker in clinic:

Lead author Dr Ali Alawieh, who completed his graduate studies at MUSC and is now a resident in neurosurgery at Emory University School of Medicine, revealed: “Our next step is to see how complement inhibitors work with comorbidities, such as old age, smoking and diabetes, in a pre-clinical study. Collectively, this information will help us design the best clinical trial when we move to humans.”

Dr Stephen Tomlinson, interim chair of the Department of Microbiology and Immunology at MUSC and senior author of the article, said they are also testing whether the complement inhibitor may be beneficial in treating other brain injuries, such as traumatic brain injury.

“We have shown that we can administer complement inhibitors as far as two months after a traumatic brain injury and see improvements in cognitive recovery,” said Tomlinson. “This is something I’m actually quite excited about. It means that months after an initial event, complement inhibitors could still be beneficial to cognitive recovery after brain injuries, including strokes.”

The paper was published in the Journal of Neuroscience.