A new study from Niigata University has found a binding protein that is vital for proper development of the central nervous system. 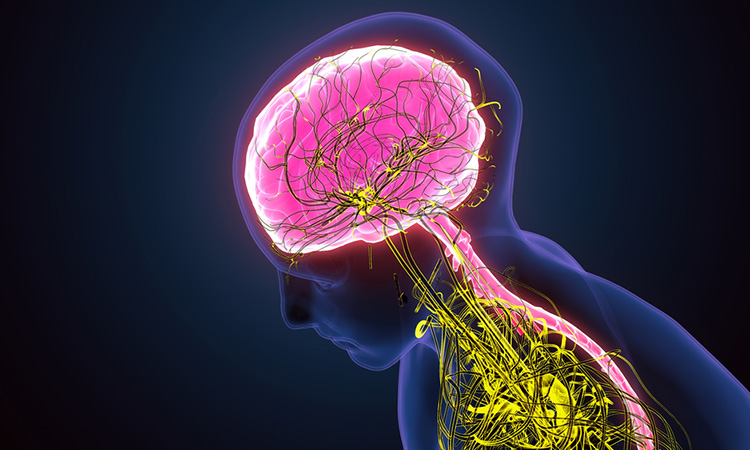 In their recent research, published in Cell Death and Differentiation, the researchers identified a new Olig2 binding protein called Ddx20, also known as Genim3 or DP103, that interacts with Olig2 during neural development. Ddx20 is known as a multifunctional molecule that regulates transcription, RNA splicing and protein translation. Furthermore, Ddx20 interacts with SMN, a causative gene of spinal muscular atrophy (SMA) and is deeply involved in the pathogenesis of SMA.

In Ddx20-deficient cells, the SMN complex collapses due to destabilisation of SMN protein, resulting in abnormal RNA splicing process (pink background). This leads to DNA damage and abnormal splicing of Mdm2 mRNA and activation of the p53 pathway due to reduced p53 proteolysis, resulting in apoptosis (cell death) of neural progenitor cells and oligodendrocyte progenitor cells.
[Credit: Niigata University]

The study involved generating Ddx20 conditional knockout mice to investigate the function of Ddx20 during CNS development. They found that apoptosis occurs rapidly in neural progenitor cells and oligodendrocyte progenitor cells. The mechanism responsible for the cell death was investigated and excessive nuclear accumulation of p53, a tumour suppressor gene product, was found. The researchers also found that interestingly, in Ddx20-deficient mice, the SMN protein was destabilised and the RNA splicing mechanisms were abnormal, leading to splicing dysregulation of Mdm2, a p53 inhibitor.

“This study highlights that a transcriptional factor, Olig2, affects not only transcriptional regulation but also RNA metabolism through Ddx20 stabilisation, revealing the diverse functions of Olig2. Importantly, since Olig2 has been reported to be involved not only in neural development but also in the progression of glioma and melanoma. On the other hand, Ddx20 has also been known as an initiator of various cancers. Therefore, the interaction of these two factors may play a key role in the development and progression of the cancers. We believe that further research might provide clues to elucidate the etiology of congenital neurological diseases and cancers, including the development of therapeutic strategies against them,” concluded Professor Hirohide Takebayashi, who led this research.