The over-expression of a growth factor receptor resulted in hypomyelination, leading to diseases such as multiple sclerosis in mouse models. 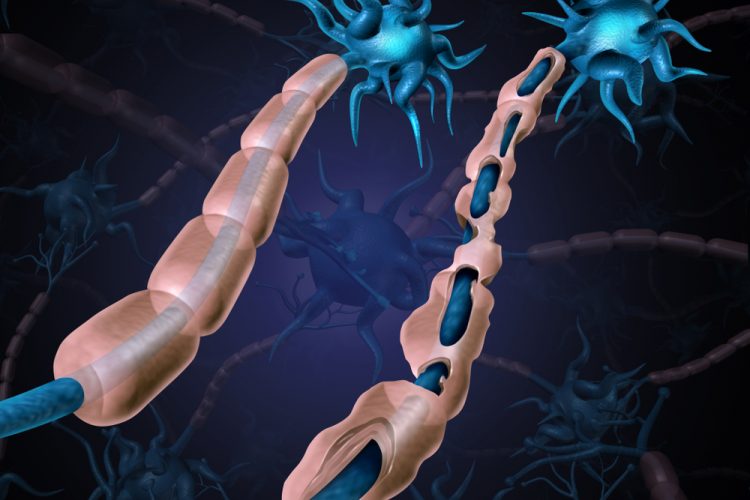 A team at the Ann & Robert H Lurie Children’s Hospital of Chicago, US, have made a discovery that could lead to a new model for researching diseases of hypomyelination such as multiple sclerosis (MS) and potentially aid in the identification of drug targets.

Platelet-derived growth factor (PDGF) signalling, through the ligand PDGF-A and its receptor PDGFRA, is important for the growth and maintenance of oligodendrocyte progenitor cells (OPCs) in the central nervous system (CNS), the team explain in their paper. PDGFRA is often genetically amplified or mutated in many types of gliomas, including diffuse midline glioma (DMG). The cellular and molecular changes that occur in OPCs in response to unregulated PDGFRA expression, however, are not known.

The researchers developed a conditional knock-in (KI) mouse model that over-expresses wild type (WT) human PDGFRA (hPDGFRA) in prenatal Olig2-expressing progenitors. They found that over-expression of PDGFRA did not cause tumours, as anticipated. Rather, the mice exhibited stunted growth, ataxia and a severe loss of myelination in the brain and spinal cord.

When combined with the loss of p53, a tumour suppressor gene whose activity is decreased in DMG, the KI mice failed to develop tumours but still exhibited hypomyelination. RNA-sequencing analysis revealed decreased myelination gene signatures, indicating a defect in oligodendroglial development.

“Our study provides a new model for studying hypomyelination,” stated Oren Becher, senior author on the study. “Blocking this receptor might prove to be a novel strategy to treat myelination disorders like MS. Of course, more research is needed to confirm our results and explore further.”

Becher also pointed out that the current study focused on prenatal events, which might explain why no tumours were formed, since timing is very important in cancer development. “We saw that too much PDGFRA interfered with differentiation of progenitor cells that give rise to cells that make myelin,” continued Becher. “These progenitor cells, which continue to be generated throughout the human lifespan, are known to be the cell of origin for brain tumours like diffuse midline glioma. Our findings suggest that the mechanisms we observed might spur brain tumour development at a postnatal stage.”

The findings were published in Brain and Behaviour.