Researchers have found inhibiting vascular endothelial growth factor A (VEGFA) signalling can mediate psoriasis development in the epidermis and could be a potential target for novel therapies. 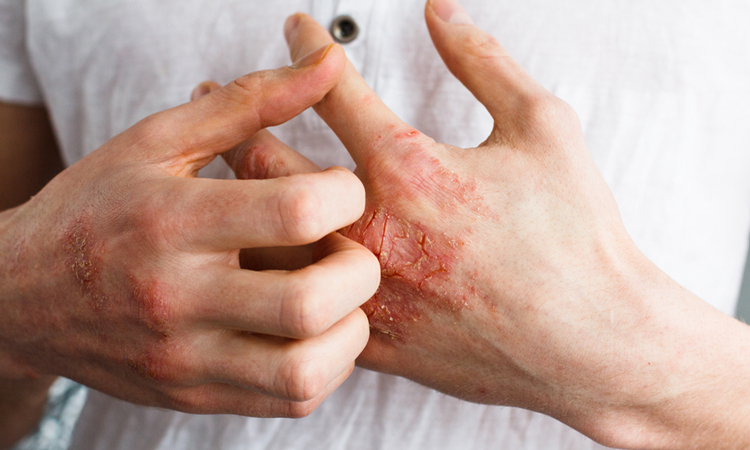 The communication between immune cells, blood vessels and keratinocytes have been previously shown to be crucial for psoriasis development, but their respective roles in the psoriasis initiation is debatable.

Administration of antibodies induced a rapid disappearance of psoriasis lesions”

VEGFA is the principal factor responsible for the formation of new blood vessels and is known to promote psoriasis. However, until now it was unclear whether VEGFA acts only on blood vessels or whether the growth factor acts directly on the skin epidermis to cause psoriasis development.

In a study published in Science Advances, researchers provide evidence that targeting VEGFA signalling in the epidermis prevents psoriasis development. Using a mouse model which recapitulates the hallmarks of human psoriasis and overexpresses VEGFA, the researchers tested the effects of genetically deleting VEGFR1 and its co-receptor Nrp1 on the skin epidermis. The authors observed that the deletion of Nrp1 or Flt1 prevented psoriasis development.

“It was very surprising to find that inhibiting VEGFA signalling only in the epidermis was sufficient to completely prevent psoriasis development including immune cell infiltration and increase in blood vessel formation mediated by VEGFA overexpression,” said Dr Farida Benhadou, first author of the study.

To assess whether inhibiting Nrp1/VEGFA interaction can be of therapeutic relevance for the treatment of psoriasis, the researchers administrated an anti-Nrp1 antibody, which blocks the interaction between VEGFA and Nrp1 in mice presenting psoriasis. Administration of antibodies induced a rapid disappearance of psoriasis lesions.

“These data demonstrate the therapeutic benefit of blocking VEGFA/Nrp1 interaction in the treatment of psoriatic disease, which may be safer for the treatment of psoriasis as compared to other therapeutic modalities that can be associated with serious side effects,” concluded Professor Cédric Blanpain, study senior author, WELBIO investigator and Professor at the Université libre de Bruxelles, Belgium.

The scientists suggest that Flt1 and Nrp1 expression have an essential role in the skin epidermis because they can mediate psoriasis development. According to the researchers, the results of this study improve understanding of the mechanisms leading to psoriasis and could lead to improved treatments.