A team used both structural and spectroscopic techniques to study the dynamics of cell surface G-protein coupled receptors (GPCRs). 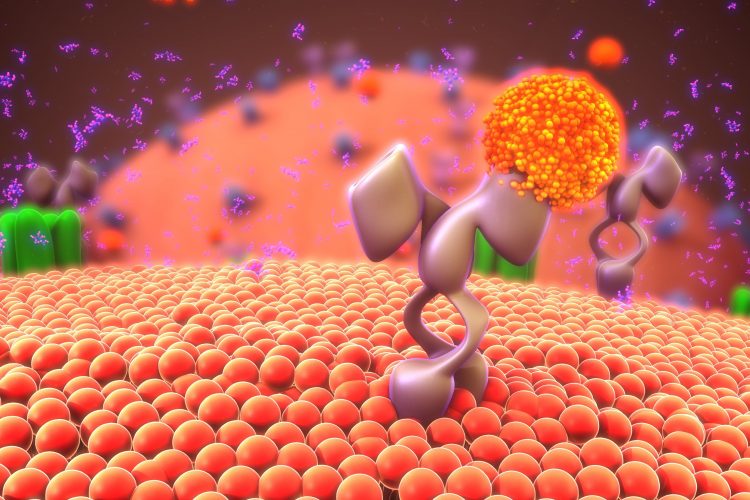 GPCRs are a family of receptors with seven transmembrane domains and couple to an intracellular protein, called a G protein, to relay a signal. Interaction of the signalling molecule with the receptor triggers a change in the three-dimensional (3D) structure of the receptor, which activates the G protein. The activated G protein triggers a signalling cascade inside the cell, which results in a response to the signal.

GPCRs are vital for a cell to survive and their disfunction has been implicated in neurodegeneration, cardiovascular diseases and cancer, and been shown to contribute to obesity, diabetes and mental disorders. This makes them a popular target for drugs; however, membrane receptor analysis has always been a slow and extremely laborious process that could not completely reveal the molecule’s behaviour inside the cell.

“Currently, scientists have two options when it comes to studying proteins. They can either ‘freeze’ a protein and have its precise static snapshot or study its dynamics at the cost of losing details. The former approach uses methods such as crystallography and cryogenic electron microscopy; the latter uses spectroscopic techniques,” said Anastasia Gusach, a research fellow at the Moscow Institute of Physics And Technology (MIPT) Laboratory of Structural Biology of G-protein Coupled Receptors, Russia.

The authors of a study published in Current Opinion in Structural Biology, used a combination of structural and spectroscopic techniques to study GPCRs and their function.

They found that the double electron-electron resonance (DEER) and the Förster resonance energy transfer (FRET) techniques act as an “atomic ruler”, ensuring precise measurements of distances between separate atoms and their groups within the protein. Nuclear magnetic resonance enabled them to visualise the overall shape of the receptor molecule, while modified mass spectrometry methods (MRF-MS, HDX-MS) indicated which parts of the molecule face outwards, based on its susceptibility to solvents.

Gusach added: “Biophysicists that use different methods to study GPCRs have been widely organising collaborations that already bore some fruitful results. We hope that this review will help scientists specializing in different methods to find some new common ground and work together to obtain a better understanding of receptors’ functioning.”

A precise understanding of how GPCRs function and transfer between states would greatly expand the capabilities for structure-based drug design, according to the authors.