NIK could be key to enhancing the effects of immunotherapy 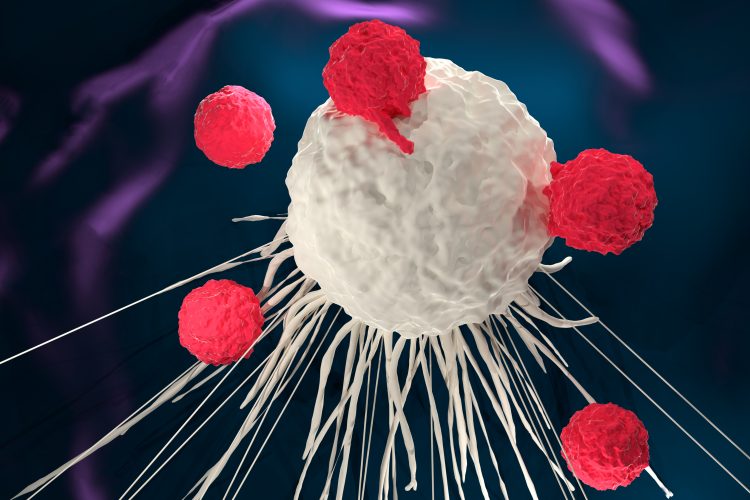 According to researchers, a protein called NF-kappa B-inducing kinase (NIK) is critical to regulating the anti-tumour immune response. In their study, they suggest that elevating the activity of NIK in T cells may enhance the efficacy of immunotherapies, such as adoptive cellular therapies and immune checkpoint blockade.

In the paper published in Nature Immunology, researchers used a preclinical melanoma model to evaluate melanoma-specific T cells engineered to express higher levels of NIK. They found that these engineered cells had stronger antitumor activity and improved survival, leading the team to suggest that increasing NIK activity may improve the effectiveness of adoptive T cell therapies.

“NIK is a novel regulator of T cell metabolism that works in a very unique manner. Biologically, NIK activity stabilises the hexokinase 2 (HK2) glycolytic enzyme through regulating the cellular redox pathway,” said corresponding author Dr Shao-Cong Sun, professor of Immunology at the University of Texas MD Anderson Cancer Center, US. “From the therapeutic point of view, we were able to improve the efficacy of adoptive T cell therapies in preclinical models by overexpressing NIK in those cells.”

According to Sun, T cells generally exist in a relatively quiet state with low energy demands and little cell division, but when they recognise an antigen and begin expanding, they activate the glycolysis metabolic pathway to meet their increased energy demands.

This metabolic shift is tightly regulated by immune checkpoint proteins, such as CTLA-4 and PD-1, which act to repress T cell metabolism. Immune checkpoint inhibitors prevent this control, enhancing the antitumour activity of T cells by boosting metabolism. T cells also begin producing proteins called costimulatory molecules after they become activated, which work to stimulate metabolism and the immune response.

The NIK protein is known to function downstream of many of these costimulatory molecules, so the researchers sought to better understand its role in regulating T cell function. In their study, they showed that NIK loss increased tumour burden and resulted in fewer tumour-infiltrating T cells, suggesting the NIK plays a crucial role in anti-tumour immunity and T cell survival.

Further experiments revealed that NIK is essential for the metabolic reprogramming in activated T cells through its control of the cellular redox system. Increased metabolism can lead to elevated levels of reactive oxygen species (ROS), which can damage the cell and stimulate protein degradation.

Their findings suggest that NIK maintains the NADPH redox system, an important antioxidant mechanism to reduce the accumulation of ROS, which in turn stabilises the HK2 protein, a rate-limiting enzyme within the glycolysis pathway.

“Our findings suggest that without NIK, the HK2 protein is not stable, and is constantly being degraded. You need NIK to maintain HK2 levels in T cells,” Sun said. “Interestingly, we found that adding more NIK to the cells, you can further increase the levels of HK2 and make glycolysis more active.”

The researchers are currently evaluating chimeric antigen receptor (CAR) T cells engineered to overexpress NIK as a potential therapeutic and hope to explore other therapeutic approaches, such as targeted therapies that could manipulate NIK activity in tandem with other immunotherapy approaches, in future.