Researchers have identified a spider-like antibacterial mechanism by immune cells that could inspire Staphylococcus aureus treatments. 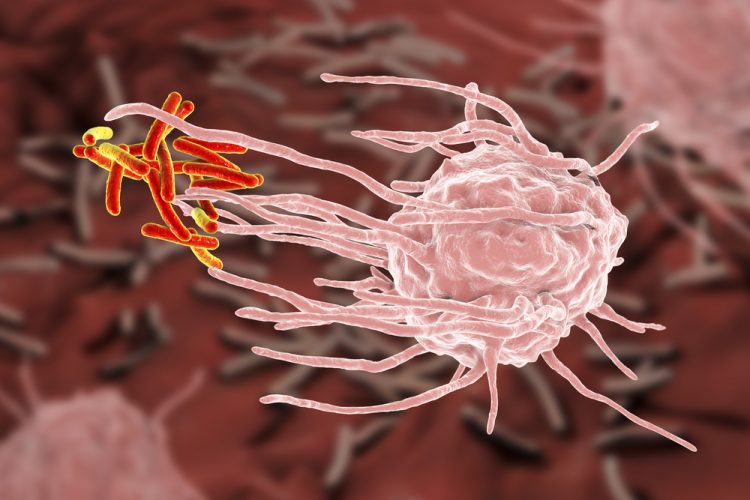 A team at the Vanderbilt University Medical Center, US, has uncovered a new antibacterial mechanism wherein immune cells co-operate to capture and “eat” bacteria. The team hope that the findings could inspire novel strategies for combating Staphylococcus aureus (staph) and other extracellular bacterial pathogens.

Previous research has established that neutrophils can self-destruct and release their protein and DNA contents to generate neutrophil extracellular traps (NETs). The Vanderbilt researchers, led by postdoctoral fellow Andrew Monteith, have further discovered that NETs boost the bacterial killing power of another type of immune cell called macrophages.

“Neutrophils produce the spider webs that immobilise the bacteria and macrophages are the spiders that engulf and kill the bacteria,” explained Professor Eric Skaar. Neutrophils and macrophages are both phagocytic cells known for ingesting bacteria and producing antimicrobial peptides, reactive oxygen species and other enzymes to fight infection. NET generation (NETosis), thought to be a form of programmed cell death, is a more recently discovered neutrophil antibacterial strategy. The released neutrophil DNA creates a sticky trap that is also studded with antimicrobial peptides.

The team began by using neutrophils that undergo increased NETosis in animal and in vitro model systems to study the biological function of NETs. They found that increased NETosis did not provide a killing advantage to neutrophils in isolation. However, when macrophages were present, NET formation enhanced macrophage antibacterial activity by increasing phagocytosis of staph bacteria stuck in the NETs along with neutrophil antimicrobial peptides. “The macrophages end up with not only their own antibacterial arsenal, but also the neutrophils’ antibacterial arsenal, all in the same compartment killing the bacteria,” Skaar said.

The researchers also showed that elimination of a staph nuclease enzyme that cuts DNA makes the bacteria even more sensitive to NET-macrophage killing. “It seems as if extracellular pathogens like staph have evolved secreted nucleases so they can cut their way out of these NETs – chop off the spider web and escape,” commented Skaar.

Blocking the nuclease would make the pathogens more susceptible to NET-mediated killing and may be a good antibacterial treatment strategy. This type of “anti-virulence” approach would allow phagocytic and other immune cells to do their jobs and kill the bacteria. “Scientists are excited about the idea of antivirulence strategies, because we know a lot about bacterial virulence mechanisms and can come up with creative ways to inhibit them,” Skarr concluded.

However, current pharmaceutical efforts focus on drugs that directly kill bacteria rather than blunting their virulence. The researchers are therefore continuing to explore questions of NETosis, including how and when neutrophils opt for this form of cell death. They are also interested in how individual differences in NETosis affect infection. In people with certain autoimmune conditions, for example, reduced NETosis may increase susceptibility to staph infections.